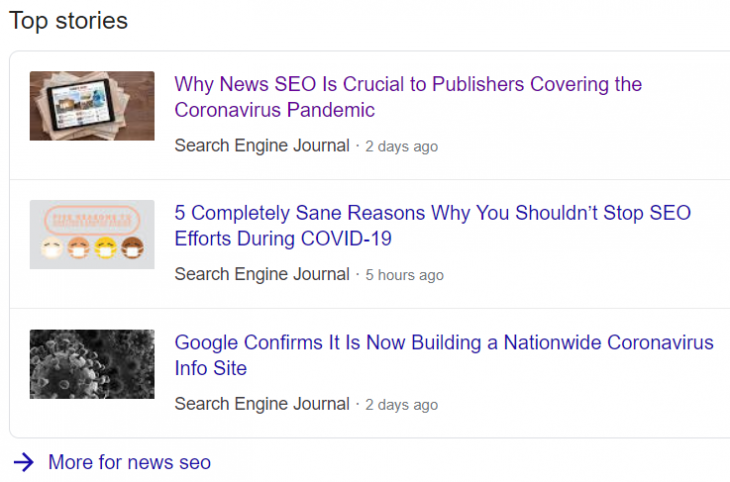 Two weeks ago, I started testing a news SEO tool called NewzDash for an article that was supposed to be published today. But, Danny Goodwin, the executive editor of Search Engine Journal, decided to publish it on Sunday, March 15, 2020. Depending on which search term you use, my story is entitled, “Why News SEO Is Crucial to Publishers Covering the Coronavirus Pandemic,” “Why News Search Optimization Is Crucial For Publishers,” or “How Publishers Can Benefit From News SEO.” It’s the same story with three different headlines.

Now, I had originally pitched the story to Danny back on Feb. 19. I said in my email, “For my article in March, I would like to report on News Search trends. I’ve been given two weeks of free access to NewzDash, which will enable me to see — for example — which news sources dominate the top stories of Google News or any of the categories like Business, Technology, Entertainment, Sports, Science, or Health. Or, I can take an upcoming news event — like the Super Tuesday primaries or March Madness — and see which news source holds the most top spots for the longest. I haven’t been able to do this kind of study since December 2010, when a tool from New Zealand called NewsKnife was still available. Let me know if there are certain stories that you want me to include in my article.”

Well, after exchanging a couple of emails, we decided to look at how the Coronavirus story was being covered. And, by the time I started the test of NewzDash on Wednesday, March 4, it was clear that we’d focused on the right topic. I only tracked two keywords, “coronavirus” and “COVID-19,” and I only crawled Google and Google News once an hour from March 5 to March 7.

And you can see the volatility of Top Stories in the 96 rankings conducted over the 48-hour period that I tested in the chart below:

So, The New York Times had a story in Top Stories (aka the News carousel) in Google’s universal search results for 52 out of the 96 samples taken on a topic that was declared a pandemic only after my test was conducted. It’s no wonder why “The Gray Lady” has long been regarded within the industry as the national “newspaper of record.” Founded in 1851, the Times has won 127 Pulitzer Prizes, more than any other newspaper. And in the digital era, my little test demonstrates that Times journalists around the world aren’t resting on their laurels.

When The New York Times Company reported its 2019 Fourth-Quarter and Full-Year Results on Feb. 6, 2020, Mark Thompson, the president and CEO, said, “2019 was a record setting year for The New York Times’s digital subscription business, the best since the Company launched digital subscriptions almost nine years ago. That success is a testament to the extraordinary work of Times journalists around the world and also to the radically different way that we’re running digital operations at the company, with cross-disciplinary teams who enjoy significant autonomy and access to the machine learning, engineering and testing capabilities they need to move our business forward.:

In other words, the #1 ranking by The New York Times in my 48-hour test wasn’t a fluke. In fact, Times journalists have been optimizing their stories for Google and Google News for years. And they haven’t been the only journalists who embraced news SEO more than a decade ago.

What is news SEO?

So, optimizing stories for Google and Google News isn’t a new phenomenon. If fact, it is old news.

Back on April 9, 2006, Steve Lohr wrote an Ideas & Trends piece for The New York Times entitled, “This boring headline is written for Google.” He said that “news organizations large and small have begun experimenting with tweaking their Web sites for better search engine results.” But, he added, “There are no algorithms for wit, irony, humor or stylish writing. The software is a logical, sequential, left-brain reader, while humans are often right brain.”

To drive this point home, Lohr quoted Ed Canale, the vice president for strategy and new media at The Sacramento Bee, who observed, “Part of the craft of journalism for more than a century has been to think up clever titles and headlines, and Google comes along and says, ‘The heck with that.’”

Well, things changed and attitudes adjusted – especially after The Great Recession accelerated the shifting ways in which Americans seek out news and information. According to data from the Bureau of Labor Statistics that is cited in the Pew Research Center’s latest State of the News Media, 74,410 people worked as reporters, editors, photographers, or film and video editors in the newspaper industry in 2008. That number had been cut to 37,900 in 2018. In other words, there are about half as many newspaper journalists employed today as there were 14 years ago.

As I observed in Sunday’s Search Engine Journal article, “This is why news SEO is as crucial to journalism in the early 21st century as banner headlines were in the late 19th century.”

How do you optimize a news story?

So, if you’re an online editor, then how do you optimize a news story?

Well, you need to recognize that you need different tools to do keyword research on the fly. Why? Well, Google has long acknowledged that 15% of the queries conducted by users on a daily basis have never been seen before. But, few SEOs and even fewer journalists have stopped to ask, “Where do these brand new search terms come from each and every day?” Well, the stork doesn’t deliver these baby keywords overnight. If you’re looking for the putative father, then you don’t need to be Sherlock Holmes to logically deduct from the available clues that it’s the “news.”

Then, after you’ve identified a couple of the newest search terms, you have to make sure that your news story “actually includes those words within it,” as Google’s webmaster guidelines have recommended for as long as I can remember.

And the news SEO experts that I know think the natural-language processing algorithms scan the title, headline, and at least the first hundred words or so of news articles. So, I’ve always recommended to the media companies that I’ve trained that their news editors should do a little keyword research to determine the two or three most-searched words that relate to their subject — and then include them in their title, headline, subheads, and first few paragraphs.

In the fall of 2005, I did some work with Consumer Reports. The editors resisted this advice until they saw that my optimized press releases about their latest product reviews were ranking higher in Google News than their actual reviews. One editor said, “That’s wrong.” And I replied, “No, that’s optimized.”

I ran into a similar kind of resistance when I did some work for The Christian Science Monitor in the summer of 2006. The newspaper’s editor-in-chief had drafted a press release to promote an 11-part series entitled, “Hostage: The Jill Carroll Story.” I had optimized it by adding “Jill” in front of “Carroll” in the second reference. And I had done the same thing by adding “Christian Science” in front of “Monitor” in the second reference.

The editor-in-chief said, “You’re violating AP guidelines!” And I replied, “Do you know when the AP guidelines for the second reference were created? During the Civil War, when both the North and South were cutting telegraph lines to disrupt communication. So, the Associated Press started eliminating unnecessary words so they could transmit their dispatches in as few words as possible. Well, this press release won’t be transmitted over any copper wires. It will be found for relevant searches in Google News. And “Carroll” is a popular first name as well as Jill’s last name and “monitor” can also mean “baby monitor” or “computer monitor” as well as “Christian Science Monitor.” So, Google has re-written the guidelines and a little, judicious redundancy helps to clarify what the story is about. So, I’m optimizing for the technology of the 21st Century instead of the technology of the 19thCentury.”

It was just a press release, so the newspaper’s editor-in-chief relented.

However, Robin Antonick, The Christian Science Monitor’s chief web officer, did give us credit for driving more than 450,000 unique visitors to CSMonitor.com in the first 24 hours after our press release was distributed, which seven times higher than the news website’s daily average in July.  And page views for the first day broke through the 1 million mark, a massive increase from the site’s July average of 121,247 page views per day.

So, you may want to violate a few AP guidelines, too.

And, if you’re a publisher, then how do you optimize a news website?

Well, as I mentioned in my Search Engine Journal article, NewzDash was created by John Shehata, who is now the vice president of audience development and SEO at Condé Nast, home to some of the world’s most iconic brands, including Vogue, The New Yorker, GQ, Vanity Fair, and Wired.

I met him in 2009, when he was Director of SEO & Social Media at Advance Internet, which included 13 local online news sites like NJ.com. We were both speakers at a session on “News Search SEO” at Search Engine Strategies (SES) New York.

So, let me share what he told my former colleague, Jonathan Allen, about optimizing websites for Google News.

As I also mention in my latest Search Engine Journal article, I met Shehata around the time that I met other panelists at similar sessions at SES London, SES New York, SES San Francisco, and SES Chicago.

This included Paul Roach of the Guardian.co.uk, who I interviewed at SES London 2010 after he spoke on a panel entitled, “No More Yesterday’s News, Real-Time SEO.”

That’s when I also met Julian Sambles of The Telegraph, who I also interviewed at SES London 2010. Here’s what head had to say after a panel entitled, “No More Yesterday’s News, Real-Time SEO.”

Matthew Brown of The New York Times. Here’s what he had to say about news search optimization at SES New York 2010.

At the same event, which was held in the spring of 2010, I interviewed Allison Fabella of The Atlanta Journal-Constitution. Here’s what she had to say about news search optimization.

And here’s what Topher Kohan of CNN had to say about news search optimization that fall at SES San Francisco 2010.

That’s where I also met Brent Payne of the Tribune Company. Here’s what he had to say about news search optimization, in particular, how one can drive links from social media.

Finally, I interviewed Maile Ohye of Google, who was the keynote speaker at SES Chicago 2010. Here’s what she had to say about optimizing a news website for Google TV. Okay, Google TV is no longer available, but the tips that she shared are timeless.

That’s how I know that their news organizations have been optimizing their stories for Google News for at least a decade. But, that was then. What about now?

Why Google News SEO is even more important today

Back in 2010, Google News indexed about 4,500 news sources in the U.S. Today, NewzDash tracks 25,000 publishers in 15 countries. And, according to Parse.ly, Google delivered 50.7% and Google News delivered 3.3% of the traffic to publishers over the past year. And where do the Top Stories that appear in the News Carousel in Google’s universal search results come from? Spoiler alert: Google News.

In other words, news websites that aren’t using news SEO are at a significant and growing disadvantage. Or, as I pointed out three days ago in my Search Engine Journal article, “organic search traffic has become as essential to online publishers today as single-copy sales by ‘newsies’ were to Joseph Pulitzer back in 1899.”