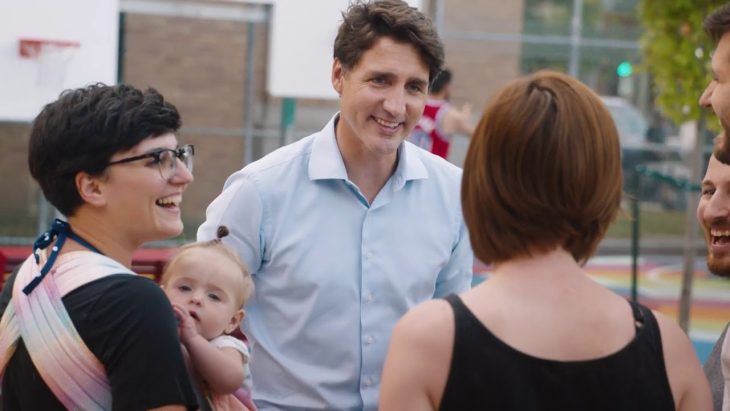 As you know, I conduct keyword research before writing articles. And one of the questions that I discovered while preparing to write this one surprised me. It was, “Is digital adverting effective for political campaigns in Canada?”

With all hell breaking lose in the United States, it’s easy to forget that the 2019 Canadian federal election is scheduled to take place on October 21, 2019. The situation reminds me of the comment by Robin Williams. During a 2013 Reddit AMA (ask me anything) session, a reader asked the actor, “Can you come to Canada so I can hug you? I love you for naming your daughter Zelda.” Williams responded, “I will be there as soon as I can! You have to give me a more specific location, you are a big country. You are the kindest country in the world. You are like a really nice apartment over a meth lab.”

Now, unlike Presidential elections on our side of the 49th parallel, voters in the Great White North don’t directly elect the Prime Minister. Voters elect 338 members of the House of Commons. Each one represents an electoral district, commonly referred to as a riding. And the party with the most Members of Parliament (MPs) after the election will decide if Justin Trudeau of the Liberal Party of Canada or Andrew Scheer of the Conservative Party of Canada will serve as Prime Minister. Yes, there’s also an outside chance that Jagmeet Singh of the New Democratic Party or Elizabeth May of the Green Party of Canada could pull an upset if the scientific, nationwide public opinion polls in Lumberjack Country turn out to be utter rubbish. But, virtually no one in the Land of Maple Syrup expects Yves-François Blanchet of Bloc Québécois or Maxime Bernier of the People’s Party of Canada to be picked as Prime Minister by the 43rd Canadian Parliament.

There’s another significant difference with political campaigns in the really nice apartment over a meth lab. They only last 40 days! The 2019 Canadian federal election kicked off on September 11, when Governor General Julie Payette dissolved the 42nd Parliament on the advice of the Prime Minister. And it will resolve itself into a dew on October 21.

And there is another important difference between political campaigns that are waged on different sides of the Canada-United States border – which is the longest international border in the world between two countries. According to the Canadian Encyclopedia, election laws “encourage greater transparency of political party activities and ensure a fair electoral arena that limits the advantages enjoyed by those with more money.” Hey, you can’t make this stuff up.

So, maybe a closer examination of the 2019 Canadian federal election will only be of interest to political junkies who pair a Tim Hortons’ double-double with a couple of Maple Dip donuts.  Nevertheless, I believe that marketers and their agencies on both sides of the International Boundary can learn important lessons about what works and what doesn’t by asking the question, “Is digital advertising effective for political campaigns in Canada?” Why? Because it’s like a controlled experiment. It gives you the rare opportunity to compare Canadian apples to les pommes du Canada.

Their campaign slogan is “It’s time for you to get ahead.” But, watch “Not as advertised,” the featured video on the Conservative’s YouTube channel, to get an idea of their actual campaign message.

But, wait! What about the other political parties in Rupert’s Land?

Well, check out Canada’s New Democrats / Le NPD Du Canada. According to Tubular Labs, Canada’s New Democrats have uploaded 29 videos since September 11 – 27 to Facebook and 2 to Instagram. These videos have tallied 160,000 views on Facebook, or 5,900 views per video; and 3,000 views on Instagram, or 1,500 views per video. In terms of engagement, their videos have garnered 6,000 engagements on Facebook, an engagement rate of 3.7%; and 600 engagements on Instagram, an engagement rate of 20.3%.

Their campaign slogan is “In it for you.” And, watch “Jagmeet Singh – New NDP Leader,” the featured video on the NDP’s YouTube channel, to get an idea of what their message means.

Their campaign slogan is “Not Left. Not Right. Forward Together.” And, watch “The Power of One Green – Elizabeth May in 2018,” the featured video on the Green Party’s YouTube channel, to get an idea of their actual campaign message.

And, in order to provide a complete or comprehensive description of this topic, let’s take a quick look at the remaining two parties in Victorialand.

Their campaign slogan is “Strong & Free.” But, watch “PPC Candidate Announcement in Toronto – Maxime Bernier,” the featured video on the PPC’s YouTube channel, which was uploaded before Sept. 11, to get an idea of their actual campaign message.

Now, unless something dramatic occurs in the next two-and-a-half weeks, it looks like when the results of the House of Commons election come in, the Governor General of Canada will ceremonially ask Andrew Scheer to “form a government.” I know, two-and-a-half weeks is a long time in politics. But, the Tories have uploaded twice as many videos as the Liberals and the Conservative’s videos are getting more views per video and higher engagement rates. Oh, and Team Scheer is uploading videos to Twitter, but Team Trudeau isn’t.

Now, if the Liberals end up spending the next 4 years as the Official Opposition, then they may be tempted to ask themselves, “Is digital advertising effective?” But, I’d argue that it is – and if they conduct a post-mortem, they’ll find that it not only worked for the Tories, but it also worked for other digital advertisers in Canada, who will spend CA$8.80 billion ($6.79 billion) on digital ads in 2019, according to eMarketer. That equates to more than 53.5% of the total ad market in Canada. Want to see an example? Then, watch “Tim Hortons | The Away Game.” There’s only one hockey team in all of Kenya. They had nobody to play. So, Timmy brought them to Canada for an unforgettable game. And, it’s worth noting, this brand’s digital ad has 2.0 million views and 10,700 engagements.

In fact, the Tim Hortons ad illustrates another lesson that Liberals need to learn before the next Canadian federal election: How to master the art and science of telling great stories.

I recently heard Joe Lazauskas of Contently speak at Telling Y/Our Story, the annual summit of Intraldo Digital Media. His DragonFly Chat was entitled, “The Storytelling Edge: The Timeless Art and Surprising Neuroscience of Stories.”

And I’d strongly recommend that Liberals in Canada read The Storytelling Edge: How to Transform Your Business, Stop Screaming into the Void, and Make People Love You, which is co-authored by Lazauskas and Shane Snow. The #1 Amazon New Release shares the secrets that have helped award-winning brands to build relationships with millions of advocates and customers.

Now, I realize that political campaigns on both sides of the 49th parallel rarely use stories in their digital advertising. But Team Trudeau may be surprised to learn a little-known fact that hidden in plain sight on pages 378 to 393 in the second edition of my book, YouTube and Video Marketing: An Hour a Day.

In one of the few sections that doesn’t need to be thoroughly updated, I shared this insight from Barak Obama’s presidential campaign in 2008. The Obama for America (OFA) campaign produced about 1,800 YouTube videos over the course of 22 months. That’s an average of 82 a month, or almost 3 a day! And fewer than 10% of them actually featured the candidate.

Who was featured in the other 90% of the videos? People like Hayne Yoon, a grassroots supporter in LA, who talks about why Barack Obama’s history as a community organizer inspired her to get involved with the campaign. Watch “Hayne’s Story” to get an idea of OFA’s campaign message.

For example, one of the more popular videos from Obama’s 2008 campaign was entitled, “American Stories, American Solutions: 30 Minute Special.” It blends footage of the candidate speaking unscripted to voters and those voters telling their own stories. And it was uploaded on October 29, 2008 – just 1 week before election day.

This video has 2.2 million views and 10,700 engagements. And it’s worth reminding ourselves that the skinny kid with the funny name went on to win what Jose Antonio Vargas of The Washington Postcalled “The YouTube Presidency.”

Unfortunately, it appears that this story wasn’t ever told around the Liberal campfires in Borealia. But, it needs to be told and retold soon if Team Trudeau wants to discover a positive answer to the question, “Is digital advertising effective for political campaigns in Canada.”