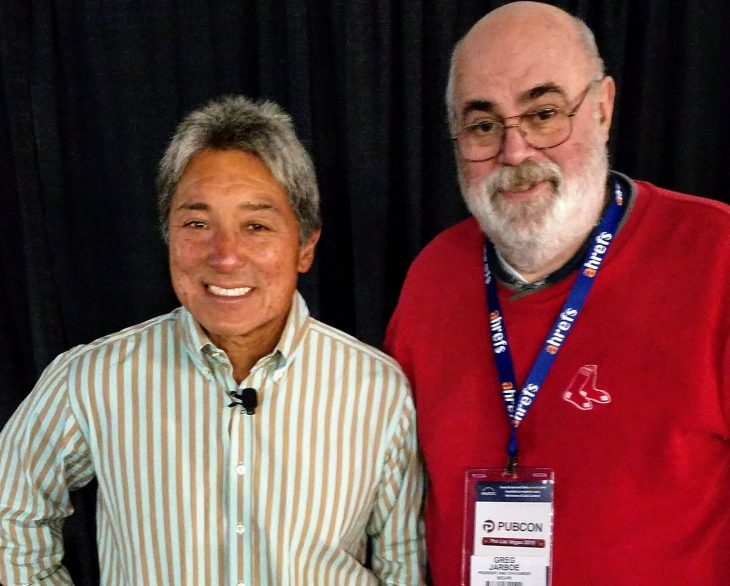 Other writers might have entitled this article, “How to use content marketing to engage your target audience.” But, I’m going to share the secret of how to use four different types of video content to enchant people. Why? Here’s the backstory.

At Pubcon Pro Las Vegas, I got the chance to see several old friends again. One of them was Guy Kawasaki, who gave the keynote presentation on Wednesday, Oct. 9, 2019. Most people in the industry know that Guy is the former chief evangelist of Apple and the current chief evangelist of Canva. And many of them have read one of his 15 books, from his first, The Macintosh Way (1987), to his most recent title, Wise Guy (2019). But, I first met Guy 30 years ago immediately after the Loma Prieta earthquake, which was responsible for 63 deaths. Among those who died were John J. Anderson and Derek van Alstyne, who were editors at MacUser magazine, which was headquartered in Foster City, California. They had just left a meeting in San Francisco when the quake hit at 5:04 p.m. on Oct. 17, 1989. They were in Anderson’s car on 6th Street between Bluxome and Townsend when the façade of a building came crashing down on them.

At the time, Guy was a columnist for MacUser and I was the director of marketing at PC/Computing, a sister magazine that was also published by Ziff-Davis. Because I had a background in public relations, Bill Ziff, Jr, who was chairman and CEO of Ziff Communications, asked me to fly to the Bay Area to help in any way that I could. By the end of October, Ziff-Davis had established the John Anderson Memorial Fund as a trust fund for Anderson’s two children. In addition, MacUser created two special Editors’ Choice, or Eddy Awards, which were named the John J. Anderson Distinguished Achievement Award and the Derek van Alstyne Rising Star award to honor the two editors.

After that, Guy and I saw each other several times at industry conferences. But, I was still surprised when he reached out in late 2010 and asked me to contribute about four pages to his tenth book, Enchantment: The Art of Changing Hearts, Minds, and Actions. He wanted me to help him explain how to use YouTube to enchant people. I immediately said, “Yes.” And then I had to ask him, “What do you mean by enchantment? Is this just a synonym for engagement?” Actually, Guy had something very different in mind.

As defined by my old friend and former colleague, “Enchantment is not about manipulating people. It transforms situations and relationships. It converts hostility into civility and civility into affinity. It changes skeptics and cynics into believers and the undecided into the loyal.”

He added, “Enchantment can happen during a retail transaction, a high-level corporate negotiation, or a Facebook update. And when done right, it’s more powerful than traditional persuasion, influence, or marketing techniques.”

And he concluded, “In business and personal interactions, your goal is not merely to get what you want but to bring about a voluntary, enduring, and delightful change in other people. By enlisting their own goals and desires, by being likable and trustworthy, and by framing a cause that others can embrace, you can change hearts, minds, and actions.”

Now, that’s a big idea. So, instead of sending him some examples from the first edition of my book, YouTube and Video Marketing: An Hour a Day, I spent some time thinking about what this bestselling business guru was really asking me to deliver. To help this process, I went for a long walk, took a hot bath, and drank a glass of Johnnie Walker Black.

When I got back to Guy, I shared this strategic insight, “Video content that can enchant people must provide intrinsic value to your viewers.” This value comes in four forms:

Inspiration: YouTube has brought to light thousands of inspiring stories of courage and bravery. For example, check out “Steve Jobs’ 2005 Stanford Commencement Address.” Drawing from some of the most pivotal points in his life, Jobs, the chief executive officer and co-founder of Apple Computer and of Pixar Animation Studios, urged graduates to pursue their dreams and see the opportunities in life’s setbacks – including death itself – at the university’s commencement on June 12, 2005.

Entertainment: Some videos are plain-and-simple guffawingly funny. For example, watch “United Breaks Guitars.” In the spring of 2008, the rock band Sons of Maxwell were traveling to Nebraska for a one-week tour and United Airlines baggage handlers in Chicago were witnessed throwing Dave Carroll’s Taylor guitar was witnessed being thrown by United Airlines baggage handlers in Chicago. He discovered later that the $3,500 guitar was severely damaged. United didn’t deny the incident occurred, but for nine months the various people Carroll communicated with put the responsibility for dealing with the damage on everyone other than themselves and finally said they would do nothing to compensate him for his loss. So, Carroll promised the last person to finally say “no” to compensation (Ms. Irlweg) that he would write and produce three songs about his experience with United Airlines and make videos for each to be viewed online by anyone in the world. This is the first of those songs.

Enlightenment: These are documentaries similar to what you’d see on PBS or the Discovery Channel. For example, view “Genocide: Worse than War | Full-length documentary | PBS.” Daniel Jonah Goldhagen’s ground-breaking documentary premiered on PBS on April 14, 2010. It documents his travels, teachings, and interviews in nine countries around the world. In a film that is highly cinematic and evocative, Goldhagen speaks with victims, perpetrators, witnesses, politicians, diplomats, historians, humanitarian aid workers, and journalists, all with the purpose of explaining and understanding the critical features of genocide and how to finally stop it.

Education: Educational videos show you how to do things and use products. For example, take two minutes and 12 seconds to examine “How To Fold a T-shirt in 2 seconds.” VideoJug presents a handy guide to cutting your folding time down to almost nothing!

Now, Guy said in Enchantment that one way to remember these four types of video is recognizing that they form the acronym “IEEE,” which is funny in a nerd humor way. (“If you don’t get it, don’t worry,” he added.)

Now, Enchantment was published in March 2011. And that was eight years ago. So, you might expect me to say something like, “Don’t read Guy’s book because it’s woefully out of date.” But, I reread it earlier this year as I was preparing my presentation for the 2019 Content Marketing Conference in Boston and Guy’s tenth book is still remarkably relevant today.

In fact, an early version of my presentation included the five slides below As you can see, I planned to say that there are four main ways to create great content that provide intrinsic value to your viewers. They are:

In other words, this is the same strategic insight that I shared with Guy nine years ago. It’s just presented in an updated two-by-two content marketing matrix. I used “YouTube Rewind 2018: Everyone Controls Rewind | #YouTubeRewind” as a recent example of video content that entertained us. This branded content got 168 million views and 4.6 million engagements.

Did it matter that it got 15 million Dislikes and only 2.5 million Likes? Well, “YouTube Rewind: The Shape of 2017 | #YouTubeRewind” got 222 million views and 5.2 million engagements. I showed “Hyundai | Celebrating 20 Years of Brilliant Moments” as an example of video content that inspires us with a family’s story. This branded content got 222 million views and 155,000 engagements.

As the video’s description says, “In the journey called life, there are a few moments that are treasured for a lifetime. Hyundai celebrates 20 Years of Brilliant Moments.” Viewers were asked to send in their stories for a chance to win a Hyundai. I also used “Google — Year In Search 2018” as a recent example of video content that educated us about all the “good” that people discovered. This branded content got 113 million views and 252,000 engagements.

As the video’s description says, “In a year of ups and downs, the world searched for ‘good’ more than ever before — according to Google Trends. From the epic headlines to the everyday moments, here’s to all the good that people discovered in 2018.”

Finally, I showed “HUL Start a little good – Water” as an example of video content that enlightened us on the positive impact of even small efforts. This branded content got 79.2 million views and 243,000 engagements.

As the video’s description says, “Hindustan Unilever believes that even small efforts can have a large positive impact. Something as simple as turning off a tap can help conserve a lot of water. We are doing our bit by saving billions of litres of water. We urge you to start a little good too.”

And it’s also worth noting that Hindustan Unilever’s “Start a little good – plastic” got 45.7 million views and 144,000 engagements. So, this content marketing type continues to enchant people.

Unfortunately, my draft presentation ran longer than the time that I had been given to speak, so these slides ended up being cut. But, as you can see, using video content marketing to enchant people is still the right goal – and providing a steady supply of video that is inspiring, entertaining, enlightening, or educational is still a good strategy.

But wait, there’s more! One of my other old friends and former colleagues is Suzie Reider. We worked together at PC/Computing from 1988 to 1991. And she wrote the introduction to the first edition of my book, YouTube and Video Marketing. She’s now the Managing Director of advertising for North America at Waze, a Google Company. But, Suzie was YouTube’s Chief Marketing Officer in the early days before the video sharing site was acquired by Google in October 2006 for $1.65 billion. Following the acquisition, she became the head of advertising sales at YouTube. In this role, she gave a presentation to the Boston Ad Club in September 2008 entitled, “Marketing with Video.”

One of the concepts that Suzie shared was, “Create ads that work as content.” This is also a big idea. As an example, she showed “Amazing Ball girl catch,” a Gatorade video ad directed by Baker Smith of Harvest Films. As you can see, the video ad has 6.5 million views and 16,000 engagements.

And hundreds of advertisers around the world have followed Suzie’s advice. And it’s worth noting that many of them have been successful creating video ads that are inspiring, entertaining, enlightening, or educational.

And it’s also worth noting that four of #TheYouTubeAd of the Year categories mirror my two-by-two content marketing matrix, although they have flashier names. They are:

#TheYouTubeAd That Makes Me Laugh: “McDonald’s’ Speechless Thoughts with Charles Barkley,” which was created by We Are Unlimited, OMD. (That video ad is no longer available, but a similar one featuring John Goodman is.)

#TheYouTubeAd That Deserves Best Picture: “Gatorade | Heart of a Lio,” which was created by TBWA\CHIAT\DAY Los Angeles, OMD & Resolution Media.

#TheYouTubeAd That Taught Me: “Nintendo Labo – Make, Play, & Discover,” which was created by Leo Burnett, Blue449.

#TheYouTubeAd That Rewrites the Rules: Bonobos’ “Evolve The Definition,” which was created by Observatory, Exverus.

So, “create ads that work as content” is still great advice. Why hasn’t it gone out of fashion? Well, as the YouTube Creator Playbook for Brands said in October 2015, “It is not uncommon to see campaigns generate at least one earned view as a result of every two paid views. And we know the YouTube audience isn’t shy about sharing brand content: Three in four YouTube users agree that ‘If there is a brand I love, I tend to tell everyone about it.’ Indeed hundreds of campaigns get more than two earned views per paid view.” YouTube hasn’t updated this information, so I have to assume that it’s still valid.

But, igniting earned media with paid media only happens if and when you use one of the four video content marketing types to enchant people. That’s the secret sauce.